With the widespread advent of “the pill” in the late 60s/early 70s, sexual and women's liberation took bold steps forward as women could take control of their behaviour in ways never before imagined. This is the story of three extraordinary women who explore love and freedom in Southern California in the 1970s, and a coming of age story for a teenage boy exposed to their eccentricities. Annette Bening gives one of the best performances of her career (sure to be Oscar-bound) as Dorothea, a bohemian mother of a teenage son, who rents out rooms in her Santa Barbara home to Abbie (a purple-tinted art punk photographer winningly played by Greta Gerwig) and a mechanic played by Billy Crudup. Throw in a more age appropriate love interest played by Elle Fanning (who hops into our hero's bed looking for platonic comfort), and you have a young lad who has fallen under the influence of three generations of eccentric, extraordinary women. We should all be so lucky. This is a rare film that focuses on character and dialogue, capturing a specific moment in pre-Reagan American history when the counter-culture was making real headway into suburban America.

“The sheer likability of these lived-in characters is a powerful magnet, thanks to insightful writing and a note-perfect ensemble anchored by a never-better Annette Bening.” David Rooney, The Hollywood Reporter

“(…) keep(s) you in thrall by how uninhibited a movie can be (…) the kind of movie you wish more directors had the courage to grab for.” Joshua Rothkop, Time Out New York 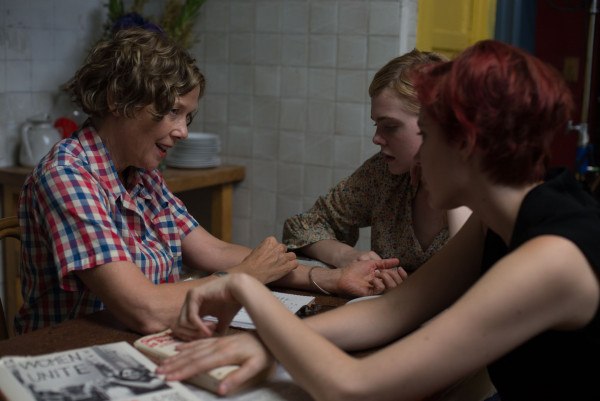