Former NHL all-star Theo Fleury was recently in the news when the coach who sexually molested him–and many other young hockey players–was let out of prison after a relatively short incarceration for his pedophilic crimes. VICTOR WALK is an inspiring documentary about Theo Fleury's ten day, four hundred kilometer walk from Toronto to Ottawa along Highway 7 in May, 2013. Fleury's walk brought attention to the plague of child sexual abuse, promoted healing amongst the survivors and aimed to lobby for stiffer laws against predators.

The statistics are astounding: one out of five males and one out of three females in Canada will be sexually molested before they are adults, and very few people ever report the crime. The response along the highway is truly astounding. Every step of the way, hockey fans come out to show their support for the 1989 Stanley Cup winner (with the Calgary Flames). Many victims, who have kept their secrets to themselves out of shame or reluctance are emboldened to share their experiences with the emphatic hockey player. Fleury really believes that talking about it is the first step, not only to personal healing, but to changing the laws of the country so that child abuse is no longer treated as a minor crime.

Given recent events that make Theo Fleury's concerns about inadequate legal punishment all too relevant, we expect this film will reignite the debate, especially as we expect Mr. Fleury himself to attend the Canadian Premiere in Whistler.

"Inspirational"
"Profiles in courage, sure to resonate with fellow survivors."
"Lynch's film offers straight talk about healing and a portrait of hard-earned self-awareness and committed advocacy." - Hollywood Reporter

"Victor Walk is one of the rare movies that speaks directly to adults, who have had to hide their shame for decades. Victor Walk will educate, inspire and move you to action." - Secret City Geek Lab 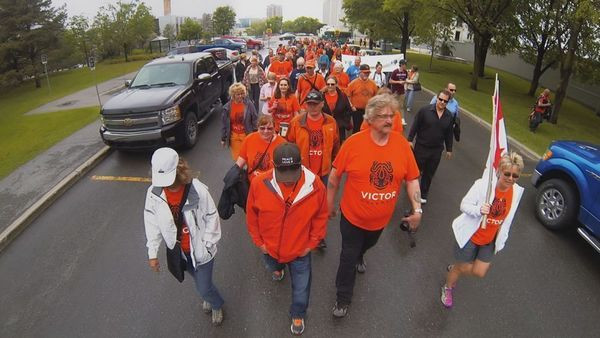