Winner of the People's Choice Award at this year's Toronto International Film Festival, LA LA LAND has been considered a frontrunner for this year's Best Picture Oscar since the day it premiered on Opening Night at the Venice Film Festival in August.

A delightful love letter to Los Angeles and the Hollywood musicals of a bygone era, this is also a touching love story, with Ryan Gosling and Emma Stone emitting major sparks together in their third on-screen pairing. Stone plays an aspiring actress, having no success at auditions, and working in a coffee shop on the Warner Brothers lot. Gosling is a jazz composer, forced to seek out a living playing Christmas ditties on a piano in a nightclub run by J. K. Simmons (so memorable in Chazelle's previous music themed award-winner WHIPLASH). Our couple first meets at the end of a tour de force opening musical dance number, shot on an overpass of the LA freeway during an unending traffic jam. But don't expect a studio-bound mega-budget musical in the MGM style of yore.

While the film gives out nods to AN AMERICAN IN PARIS and SINGING IN THE RAIN, and an especially memorable sequence at the Griffiths Observatory that recalls REBEL WITHOUT A CAUSE, film buffs will also recognize homage moments to Jacques Demy's THE UMBRELLAS OF CHERBOURG and even Jean-Luc Godard's WEEKEND. The film is full of swoon-inducing moments of haunting beauty, and is one night at the movies you won't soon forget.

“…has a heart as big as its Cinemascope screen”, John Bleasdale, Cinevue

“It has its head in the stars, and for a little over two wonderstruck hours, it lifts you up there too.” Robbie Collin, The Telegraph 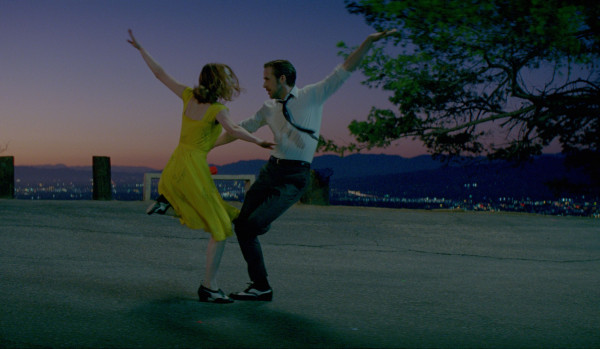