This movie is a globe-trotting celebration of adventurous women, who span the globe seeking out sports thrills. From finding the biggest waves to surf, to skiing the greatest slopes, these girls live freely. The film is beautifully shot, featuring landscapes from Hawaii, New Zealand, Canada and Austria. On each step of the journey, Sandra Lahnsteiner surrounds herself with some of the best female skiers out there. We hook up with such people as Julia Mancuso, known for making her own US ski films. Carissa Moore, Janina Kuzma, Nadine Wallner, Evelina Nilsson and the beloved Matilda Rapaport are just some of the crazy adventurous women who join Sandra on her incredible adventures.

BETWEEN is the third SHADES OF WINTER movie featuring an all female cast, directed by Austrian skier and filmmaker Sandra Lahnsteiner. The most successful one in the series before this was 2014's PURE: A SHADES OF WINTER MOVIE, co-directed with Mario Feil. It had a running of 57 minutes. In this, the first feature length entry in the series, directed by Sandra on her own, you can see that she is stepping up her game. This film should serve as an inspiration to young female athletes everywhere. 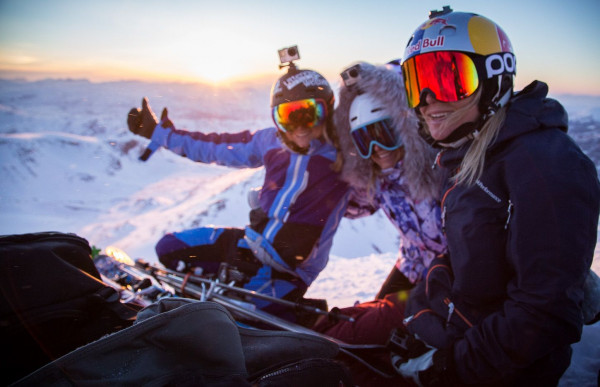